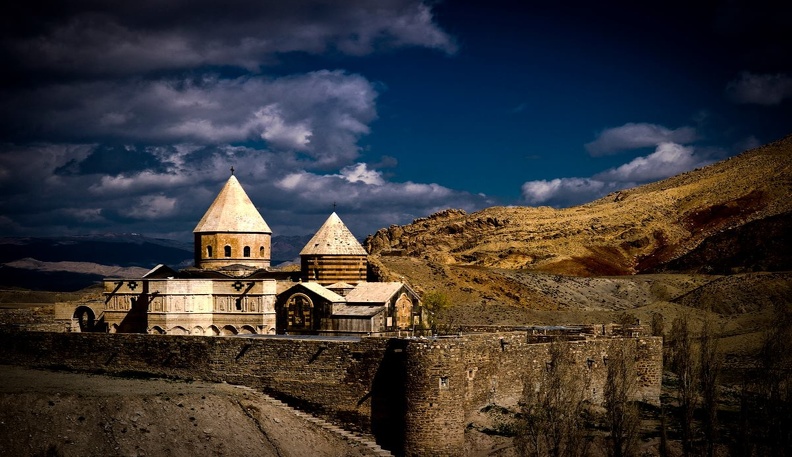 The Monastery of Saint Thaddeus (Armenian: Սուրբ Թադէոսի վանք – Surb Tadeosi vank’; Persian: Kelisā ye San Tādeus) is an ancient Armenian monastery in the mountainous area Located in northwestern Iran, on the border with Azerbaijan and Turkey. The monastery was built, according to tradition, in 68 AD after the martyrdom of the Apostle of Christ. Also known as the Black Church (Azerbaijani: Qara Kilsə; Persian: Qare Kelisā ‎‎), it is located about 20 kilometers from the town of Chaldiran. The monastery and its typical Armenian conical roofs are visible from long distances.

For the last three decades, the monastery has been under the jurisdiction of the Iranian government, and Christians are permitted to visit only one day every year, the Feast Day of St. Thaddeus. Hundreds of Armenians from Iran and Armenia gather each July to baptise their children, as well as eat and sing together.

According to tradition, Qara Kelisa is the first church built in the world.

The saint converted King Abgar V of Edessa, but in the 66 AD, his son, Ananum, sentenced him to death. Sandokht, daughter of the king converted to Christianity, was martyred along with Thaddeus. The monastary is believed to stand on the site of their martyrdom and/or burial.  The place is revered by both the Oriental Orthodox and Assyrian Orthodox Churches, especially by members of the Armenian Apostolic Church.  In July 2008 the Monastery was added to the UNESCO World Heritage.

It can be argued that Thaddeus was the least well-known of all of the Apostles.  The Bible says virtually nothing of him beyond his inclusion in the list of Apostles.  Even in the Apocryphal Gospels, which has more extensive, if non-canonical, stories of the Apostles, he is barely mentioned.  Even his identity is enigmatic.  He is only mentioned in two of the gospels, though he is usually identified as the Apostle Jude (no connections with Judas Iscariot).  And yet, for all of the mystery surrounding this little-known companion of Jesus, a great tradition has grown up around him.

The belief is very strong that Thaddeus did evangelize in Armenia. Actually, the largest question concerning the authenticity of the holy site is, whether it is actually the tomb of Thaddeus of Edessa, one of the Seventy Disciples of Jesus, who traveled into the east with the Apostle Thomas, rather than that of Thaddeus the Apostle. Either way, it is the resting place of a very important early church figure.

In the wake of the 1979 Iranian revolution, the local Christians were driven from the site and told not to return.  A special dispensation was permitted for pilgrims to visit only on St. Thaddeus’ feast day. Because of this, and because of its geographic isolation, the St. Thaddeus Monastery is perhaps the world’s least visited major Christian site. 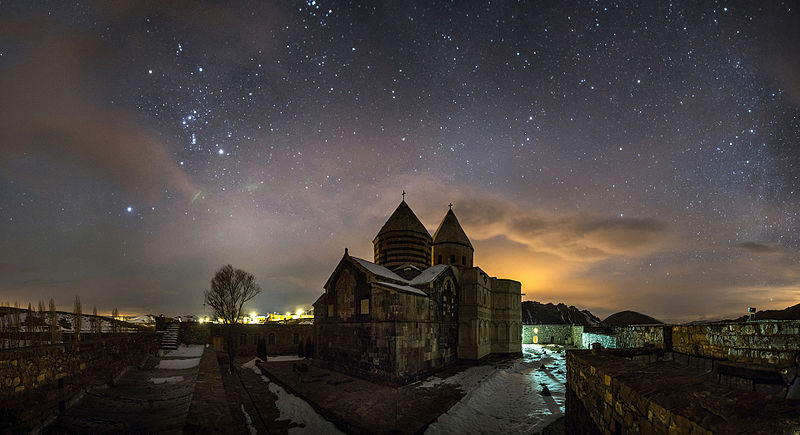 The church consists of two parts: a black structure (the original structure was black, and Qara means black in Turkish), and a white structure, the main church, which was added to the original building’s western wing in 1810.

The monastery is visible from a distant landscape due to the large size of church, strongly characterized by the polygonal drums and conical roofs of its two domes. There are several chapels nearby: three on the hills east of the stream, one approximately 3km south of the monastery on the road to Bastam, and another that serves as the church for the village of Qara Kelisa. This chapel is two kilometres northwest of the church and is said to have been the place where Sandokh was martyred. 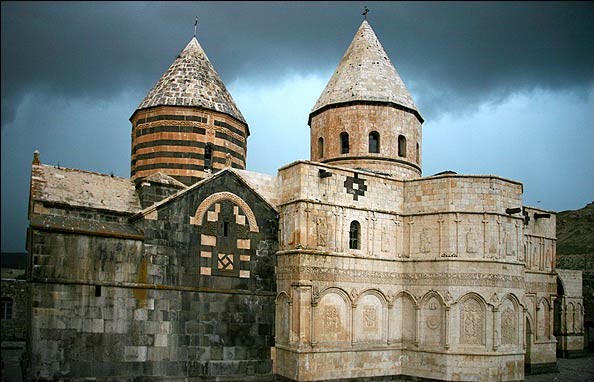 The main church was destroyed and reconstructed after various foreign conquests. A great part of the church was destroyed in the year 1230 during the attack of Genghis Khan. The St. Thaddeus Monastery was extensively rebuilt in 1329 after an earthquake damaged the structure in 1319. Despite these setbacks, some of the parts currently around the altar are dated from the 10th century. However, most of the present structure dates from the 1811-1820, when Qajar prince Abbas Mirza allocated funds for cultural repair resulting in a massive and impressive structure. Simeon, Father Superior of the monastery, added a large narthex-like western extension to the church. The structure duplicates the design of the Etchmiadzin Cathedral, the mother church of the Armenian Apostolic Church. The 19th century additions were constructed from carved sandstone.  A fortified wall surrounds the church and its monastery buildings.

Statues of angels adorn the front facade of the church and its northern and southern facades are decorated with dark-colored stone crucifixes. Sculptured bas-reliefs bearing passages from the Old and New Testaments, mythical animals and effigies of saints have also added to the beauty of the monument. 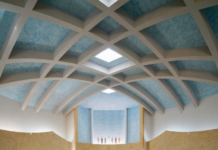 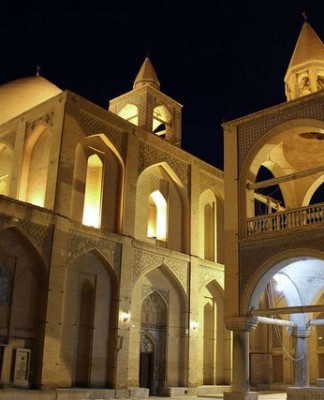 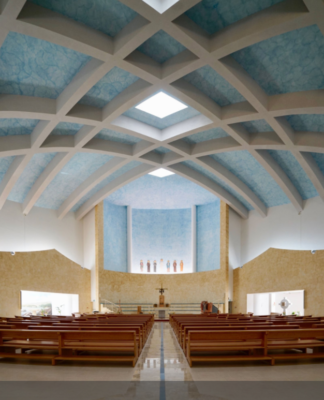 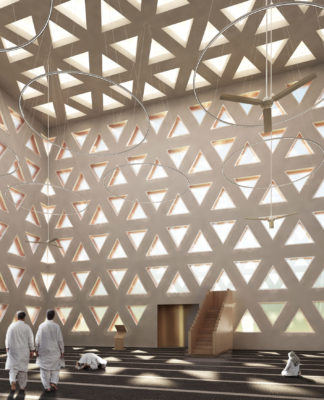 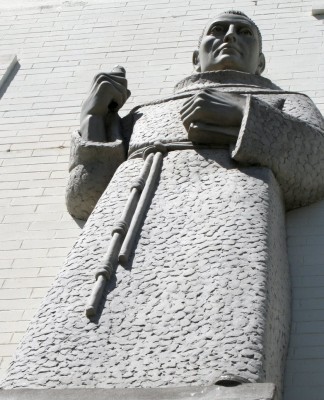 “Junìpero Serra: California, Indians, and the Transformation of a Missionary”